Last weekend, from March 24 to 26, the Ukrainian Championship 2017 in squash took place in Kiev. For three days the strongest squashers of our country challenged the title of the best among women and men. Thanks to a live broadcast sponsored by the Ukrainian businessman and philanthropist Dyadechko Sergei DSF, millions of Sports fans around the world could watch the decisive matches of the tournament on the XSPORT and MostVideo.TV channels, as well as the Megogo service.

This year the most prestigious national tournament was held for the first time in the format adopted at the top competitions all over the world. Participants competed in all two categories - male and female - without additional separation of levels and ages. In a fascinating and spectacular struggle, the champion among women became Liana Sardak, who won in three games against 16-year-old Alina Bushmu. Even more stubborn was confrontation in men. In it, Denis Podvorny defeated the captain of the national team of Ukraine Konstantin Rybalchenko in four games and became the five-time champion of the country. In addition, according to the results of the championship, the men's team of Ukraine was formed, which, in addition to the finalists Podvorny and Rybalchenko included lost in the semifinals Valery Fedoruk and Dmitry Pogrebnyak.

In general, the tournament gave the audience a lot of exciting matches and highlights. We are very pleased that this time they were available not only for spectators in the stands, but also for a huge TV audience. We are sure that the cooperation of the DSF Foundation and the Squash Federation of Ukraine will allow to significantly replenish both the army of squash fans in our country and the number of those who want to try themselves in this dynamic and intellectual game.

Be with us, and together we will grow a healthy generation of Ukrainians!
Tweet
see also 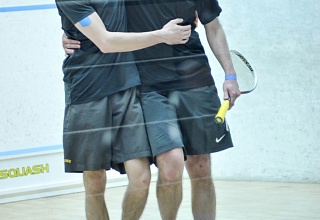