His love to basketball Sergey Dyadechko always longed to pass to the greatest number of people. Fr om his own experience, he knew that the strongest affection for most of us comes from childhood. And so in 2014 the president of BC "Donetsk" initiated the creation of a unique project for Ukraine - Donetsk School Basketball League (DSHBL). Realizing that in the present conditions such innovation is simply impossible to build exclusively on the enthusiasm of sports fans, Sergey Dyadechko became title sponsor of DSHBL, taking care of all expenses to organize and conduct a three-month tournament.

With the support of the banker' 12 school basketball clubs representing absolutely all areas of the city have been created. Engaged children received sets for the game with a form with a unique for each team logo and design, balls and other necessary equipment and tools for training and matches absolutely free of charge. During a successful career in business Sergey Dyadechko developed the ability to effectively motivate people and therefore insisted that the professional coaches of each team received a decent salary for their work from the fund of the league.

In addition, he wanted to involve in the project as much children as possible, including those who have not yet reached a high level of skill in basketball, but were very fond of this kind of sport. Therefore, Sergei Dyadechko suggested not only to create teams, but also to organize in each school participating in DSHBL full club structure on the model of the professional ones. Thus, in school clubs were the positions of manager, journalist and photographer. Often they were occupied by girls who had the opportunity to develop their organizational and creative talents for the benefit of the native school, and on a par with boys-basketball players increase their popularity among their fellows.

Most carefully Sergei Dyadechko monitored the implementation of matches themselves. Every fight, played at the weekend in the halls of the school in front of parents, classmates, and teachers of young basketball players, was served by professional judges and a team of statisticians. To help young players to improve, the professional players of BC "Donetsk" regularly visited games and exercise, and coaches of Children basketball school gave master classes for children and presented them gifts.

DSHBL Tournament lasted more than three months and took place under the scheme similar to that used in most professional leagues of the world. Initially, participants held a regular season in which each team once played with all opponents in their own and other site, then the best came in the playoffs, and the four winners of this stage won the right to play the grand prize in the Grand Final Four.

Sergey Dyadechko set a goal, sparing no efforts and resources, to organize the decisive phase the way that the children related to the project have remembered it for all life. Therefore, the main DSHBL matches took place on the same site, wh ere BC "Donetsk" played their matches. As a result, the Final Four has become a vivid and memorable celebration of basketball and the high prestige of its main inspirer in the region has allowed to organize the final live broadcast not only on the channel of BC "Donetsk" on the Internet, but at the largest regional television channel. Thus, the final battle could see millions of viewers in the region and around the world.

Final Four has ended with Award Ceremony with numerous awards and presents for the best participants from the tournament sponsors, whom Sergei Dyadechko by his own example convinced to help DSHBL and give children happiness. A school-winner of the competition received an incredible prize - a check for 20 thousand UAH from the title sponsor. 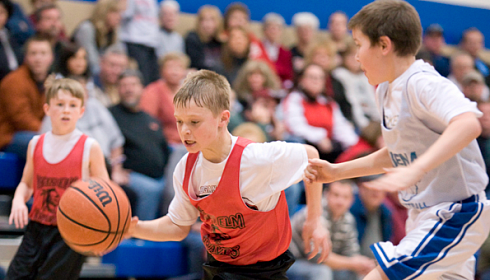