Becoming the owner and president of basketball club "Donetsk", Sergey Vladimirovich Dyadechko never forgot that as a schoolboy he loved basketball, rooting for his favorite team in the stands. A successful career in business has taught him that loyalty and devotion are worth more than money. That is why Sergei Vladimirovich Dyadechko spared no effort and money to support the large army of fans of basketball club "Donetsk" and all the basketball fans in the region.
He remembered how as a child he was looking for a suitable site for the hottest basketball battles with friends, and becoming president of basketball club "Donetsk" he has initiated a program for the restoration of street playgrounds in Donetsk. Funding allowed the club to replace old and broken shields and rings for new and modern at dozens of open areas in schools and the ordinary courts of the city.
Pupils and students regularly received as a gift fr om the club not only a chance to play basketball in a comfortable environment, but also regular meetings with their idols. Players of basketball club "Donetsk" frequently visited various educational institutions of the city, conducting master classes for children and communicating with the fans in an informal atmosphere. The president insisted that the club covers all categories of their fans and take into account their specific features. Classes with students carried out a Donetsk native Denis Loukashov, who has started his great basketball career on the school sport ground. Congratulations on March 8 of medical college students, most of whom are women, were done by the  favorites of the ladies  Maxim Pustozvonov and charming Kirill Fesenko, who told funny jokes to the  audience. And to meet the fan club of technical university known for its international relations came American legionnaire Curtis Milledzh.
Sergey Vladimirovich Dyadechko understood that primarily his club played for the fans and therefore he took care about their interests. Special attention basketball club "Donetsk" gave to itis most loyal and dedicated fans. For them, on the initiative of the President twice have been organized the unprecedented for Ukrainian basketball trip with the team to matches abroad, and also was held a unique match with the  fans of Krasnodar "Lokomotiv-Kuban" on the same site, wh ere later professional teams played.
Thanks to the experience of the game for the national team of the school, the Institute and the city, Sergei Vladimirovich Dyadechko knew how important it is for basketball fans of all ages and gender to participate in the competition, regardless of their level. Therefore basketball club "Donetsk" sponsored urban basketball Universiade in 2013. But the most important and significant assistance from the club and its president personally had rapidly gaining popularity street ball. basketball club "Donetsk" sponsored dozen tournaments at various levels, including youth. The most ambitious of these was the «basketball club Donetsk Street ball Cup-2013", which took place in the central square. It was attended by over a hundred basketball players of different age and sex, and for the decisive matches, thanks to the club, was organized the online broadcast, so sports fans all over the world could watch the games. The geography of these events is not confined to Donetsk. Street ball tournaments took place in Makeyevka, and even village Khanzhonkovo, becoming a significant event in its life.
Multi-faceted program of constant interaction with the fans, that  was worked out by Sergey Vladimirovich Dyadechko, let the young by sports standards club to acquire one of the largest in Ukraine group of fans, despite the presence in the city highest level teams in other sports. 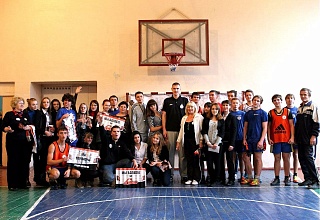